Remembered in Love
"Come to me, all you who are weary and burdened,
and I will give you rest." 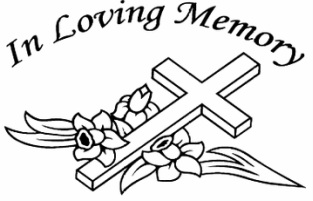 Our Dear Sister and Saint Mrs' Gisela,
went to be with the Lord on
Sunday December 1st , 2013

..Our Dear Sister in Christ, Sharon Mumford, went to be with the Lord on Friday May 3, 2013

CLICK HERE
to listen to one of PASTOR RICH'S SERMONS

Barbara Ann Downour went home to be with the Lord on Sunday, March 29, 2009. She left this life peacefully at 2:33 a.m. with her daughter Naomi & sister Connie at her bedside, in her home. She was a selfless and faithful servant of the Lord. An amazing mother, grandmother, daughter & friend. She was a cherished member of Mt. Calvary Community church and a vital part of the music ministry. Barbara is survived by her daughter Naomi & her family - husband Alexander Hines, sons Kyan & Caelen Hines, mother Mary Kathryn Duncan, brothers Tom Duncan, Ron Duncan, Dan Duncan & sister Connie Montgomery.

Joe B. Calkins, died at 7:45 am. at Fairfax Hospital, on Sunday, March 29, 2009. Joe is survived by his beloved wife Ruby, sons Dr. Joe B. Calkins, Jr., and Frank Edward Calkins and daughter Vivian Anne McGettigan. Ruby and Joe’s marriage was blessed as well by 14 grandchildren and 8 great-grandchildren

Evelyn D Campbell, age 79, was called home in her home in Springfield, Virginia on Thursday March 6th 2008. She was preceded in death by her first husband, Bob Young in 1966. Also precede in death by her second husband, Pastor Ed Campbell in 2003. Evelyn and Ed knew each other as childhood neighbors kids in Omaha, Nebraska. [Ed always said they courted since age 3; mud pies in the back yard.] Evelyn was saved at the age of 18. She was extremely missionary minded and always involved in teaching Sunday School classes. She and Ed became a real team as pastor and wife of Mt Calvary Community Church for 28 years. Evelyn is survived by her nieces Jeneane and Kathleen; a nephew David; and a stepson Ed, Jr. She was a charter member of Mt Calvary Community Church since the inception in 1975, she remained active in the church as Trustee, and a member of the Missionary and Gospel Concert Committee. Evelyn worked all her life: At age 16 for the Railroad, a store detective for Hecht's, a clerk for the Government, and her most Loved position as pastor's wife. She'll be sorely missed for all whom she's encouraged, supported and prayed with. Her loves were people, church, Southern Gospel music and Jesus.

Mt Calvary has been truly blessed to have had Evelyn Campbell (Also Known as God's Girl) as part of our church family. She was an encourager and a woman of prayer. Her expressions of praise will long echo in our ears.. 'Amen!'; "Preach It Charlie"; "Praise the Lord"; "Glory"; "Sing it, Joe"; "Play it, Patrick"; "Play it, Terry Lee"; and "I Love you ____."

Evelyn will have rewards for a life well lived in honoring the Lord and inspiring Others. She cultivated an exemplary character; delighted in her intimacy with the Lord; and was a trusted mentor, counselor, coach and friend to many.

Thank You, Lord, for the life/friendship of Evelyn Campbell.

Hilton Alfred Page, 71 of Arlington Virginia passed away 16 Aug. 2007 at 10:55pm. "Hill" was a native of Portland, Maine where he graduated from the University of South Portland High School. He also attended Bates College and graduated from the University of Maine. He entered the U.S. Army during World War II, where he performed with the Army Band while serving in Germany. Hill was preceded in death by his parents, Leland A. Page and Delia Hilton Page. He leaves behind his devoted wife, Lois; five children, David Page and his wife Karen, Carolyn Moffatt and husband Page, Melanie Eberling, Jonathan Page, and Allison Page; three step-children, Dawn Tannheiser and husband Dietmar, Michael Vok and his wife Monica, and Mark Vok and his wife Jaqui; plus 11 grandchildren. He is also survived by a sister Roberta Page Barker and her husband John of Portland, Maine. He leaves behind dozens of beloved friends whom he shared his gift of music. Hill was a talented pianist and singer who began performing at an early age and continued until he was diagnosed in Spring 2007 with ALS "Lou Gehrigs Disease". Most notably, Hill performed for more than 27 years at The Market Inn of Washington D.C. He was also a devoted member and Deacon at Mt. Calvary Community Church.

Geneva Rose Cave, 67, of Alexandria, died on Saturday, Jan. 27, 2007, at Inova. She was bornon September 2, 1939, in Stanley and was a daughter of the late Ozzie Lee and Blanche VirginiaAleshire Buracker. Mrs. Cave was a home maker and a member of the Mount Clavary Comm.Church in Alexandria, Va. On Aug. 31, 1958, she married Arthur Floyd Cave, who survives.Surviving in addition to her husband are a son, Arthur F. Cave Jr. of Woodbridge; a daughter,Faye Elizabeth Cave Yager of Stanley; two sisters, Carolyn A. Buracker of Luray, and EllenYoung of Rileyville; four brothers, Dwight T. Haskell, William Thomas and Harry G. Burackerall of Stanley; and five grandchildren. She was proceded in death by a brother,Freeman Buracker.

Carolyn Virginia Tippett "Carol", 64, of Springfield, Virginia passed away August 27,2007 in her sleep sometime after 3:30am. Carol is survived by her husband Joe, her son Brian, her daughter, Virginia "Jenny", four grandchildren, Jeremy, Robby, Alix and Marc, her sister Jonnie and brother, Bill.

Carol was born on July 5, 1943, In Chattanooga, Tennessee to Paul and Katherine Merritt and moved to Ft. Belvoir, Va in 1949. Carol's teen years were spent growing up in a small two bedroom home in Alexandria, attending Mt. Vernon High School, graduating in 1961. Simply glancing in her senior yearbook, you find comments that that would apply today... "This roof will fall in when you leave." Carol began working with the government after high school in notable positions with the Joint Chiefs of Staff and, after raising her children, with Army Material Command. Over the past 20 years, Carol has been a managing partner with her husband Joe in a local Virginia business.

Carol leaves behind a tremendous amount of wonderful memories for her family and hundreds of friends she has touched and will continue to impact over the years.